Day 3 - From Nannie and Grandad's to Port Augusta!!

The alarm went off at 5:30am!!!
We had packed the night before so getting up was pretty easy. We said our goodbyes to Nannie and Grandad and hit the road. It was 1 degrees when we left so we were shaking like you wouldn't believe. Today was a long drive, it was going to take us 7hrs and 34mins to get to Port Augusta.

On the way out of Sea Lake we went past the old tennis courts where mum informed us that her name was up in gold letters on a shield on the wall for being the winner of an Under 16 Tennis Tournament. (The Southern Mallee Champ Lives On!!!!!!!!!!!!)
We went through Mildura where we past a motel that mum and dad stayed many years ago (before Charlotte and myself were born) with their friends Maree and Austy. They were whispering about things that they did and were laughing their heads off. They said they would like to share the stories with us, but we would have to wait until we were 18+. I can only imagine what they could of been up to because if Austy Coffey was with them they would of had lots of fun. They came up in Austy's Panel Van (and you don't see many of these on the road or around these days) and mum and Maree rode in the back (there is no back seat!!), sitting on bean bags and can you believe it......no seatbelts!!!!

We decided to look up where Shane Crawford's route was that he was travelling for his TOUR DE CRAWF. He is riding his bike from Melbourne to Perth to raise awareness and money for breast cancer research. We thought it would be great if we could see him along the way because he is amazing to be attempting such a big ride and we wanted to cheer him on and to donate some money.
We got to Morgan which is a small town of about 426 people and all the school kids were outside of their school with lots of pink signs and balloons everywhere. We waited with them for about 45 minutes and then a policemen came along and said that Crawf would be about another hour or so. 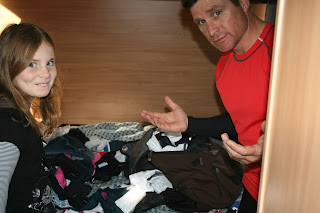 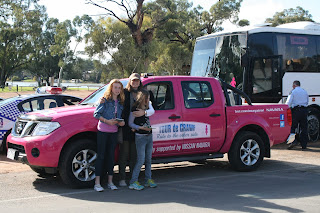 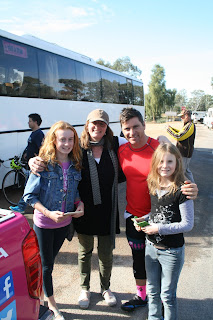 We needed to get back on the road as we wanted to get to Port Augusta before it got dark as we are newbies to this caravanning thing and thought it would be easier to do our first set up in the light. We decided to go to the ferry where he was apparently having lunch before he headed toward the school. When we pulled up near his big coach, he came out to say hi to us. We all gave him a big hug and told him he was very inspirational and thanked him for doing this amazing ride and raising money for breast cancer. We told him our about mums breast cancer journey and he said that he thought all the women who fought breast cancer were inspirational. We took photos with him and he also gave us a tour of his big coach. His room was very messy but he was really nice and lots of fun to talk to. Mum and Charlotte got interviewed by a lady and then it was shown on the footy show on Thursday night. I have attached a link if anyone wants to see it. Charlotte thinks she is famous now and thinks she needs an agent to manage her!!  ha, ha.
We arrived at Port Augusta at about 5 ish and mum put the thermomix on and we had a big feed of Beef Rendang. It was delicious. We were all very tired and fell into bed for our first night of sleeping in our van on our big trip.