We started off our fitness campaign this morning and dad and I went for a 4 km run around the Yalara Resort. Mum and Charlotte stayed snuggled up in bed together because it was too cold for them and they said they were going to start their fitness program when we get to Darwin. ( I will let you know how that goes?)


It is a large resort that is right in the town called Yalara. Mum thinks that they use the term "resort" very loosely up here in N.T.  It is about 25 kilometers from Uluru and it has been designed to blend in with the environment, including being powered by the sun. This is where most people stay if they want to visit the national park as you are not allowed to stay around the rock anymore. We ran up to the lookout and watched the sunrise over Uluru and the colours were beautiful and changed as the sun got higher in the sky. We did some planks after our run and Charlotte had got up by then. Dad held his plank for 1 minute and 30 seconds and Charlotte and I held ours for 1 minute. Charlotte was shaking like a rattle snake when she did hers.


Uluru (Ayers rock) and Kata-Tjuta (the Olgas) are in the Uluru-Kata Tjuta National Park and is covers 1,260 square kilometres. It is run by the Anangu (the local aboriginal people) and Environment Australia and is it also world Heritage listed because of its natural and cultural values. This means that it is a very special place in the world and protects it from being altered by people.


Today we got up and headed off to the Uluru-Kata Tjuta national park and we did the Valley of the winds walk at Kata Tjuta (the Olgas). The walk was 7.4kms and it was amazing walking though the valley and I felt so small when we looked up at the high rocky ledges above us. It was quite a steep walk going up and down the steps but i love walking on the uneven rocks. 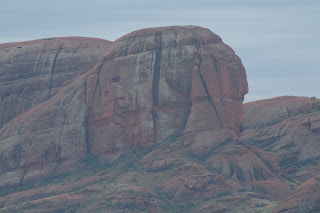 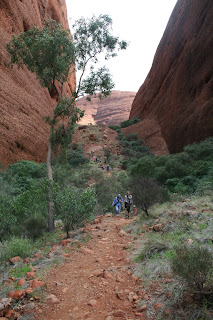 The Valley of the Winds 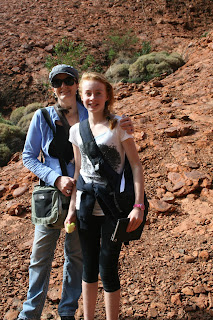 Mum and Me.... still smiling but only half way round
We couldn't believe how red the rocks were and sometimes it felt like we were the only ones there. Dad looked like Indian Jones in his hat and clothes so I called him "Indiana" all day. 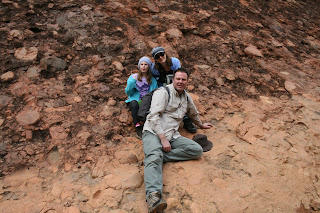 Indy and the Girls
Charlotte loved this walk and she was like a mountain goat going up and down the ledges. Mum had to keep telling her to slow down as she would get too far ahead and we would loose her when she went around the corners. 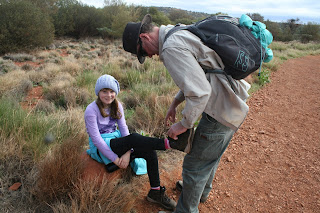 Some running repairs for the Mountain Goat

I was very tired when we finished the walk and mum made us a big chicken curry in the Thermomix for dinner and we all slept very well.

We got up early to get through the gates at the national park because we wanted to go on the Mala walk. This started at 8 am and a ranger takes you on a tour and tells you all about the different areas around the rock which are important to the aborigines. This was really interesting and we saw paintings on the rock that were done thousands of years ago. 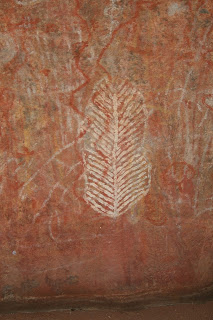 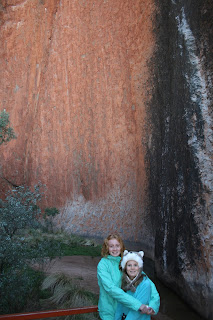 Me and a Friendly Dingo


I learnt lots of interesting facts about Uluru and have written two pages of information in my journal. When we got back from our walk the other ranger had just closed the gates to the climb and no one else was allowed to climb the rock today because it was too windy on the summit area. We saw some girls that only went a little way up and decided they wanted to come back down because of the wind and they were very scared and came down very slowly on their bottoms and lots of people stopped to try to help them because they were taking ages. I felt very sad and scared for them. When we got back from the walk, Mum and dad had already decided that they were not going to do the climb after listening to the ranger talk about how it is a very spiritual and sacred site for the aboriginals but I had not made up my mind yet........but when the ranger closed the gates I didn't have to decide because it was too late to do the walk  as he had already shut the gate and closed the walk. Oh well maybe next time.

That night we booked to go out on a bus to watch the sunset over Uluru and then to go and have a "dining experience" under the stars by the rock. 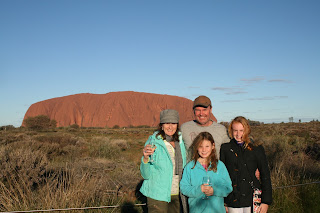 This was mums birthday present because we didnt have time to take her out before we left because we were madly getting organised to go away. 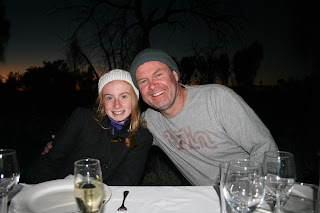 Dad set up his camera to take photos every minute when the sun started setting. We had dips and nibbles and soft drink and they had champagne for the adults. Charlotte and I had a great time eating all the nibbles. It was very cool but we had our big northface  jackets on that we bought in Vietnam and our knitted beanies that Chicko gave us,  so we were very warm. 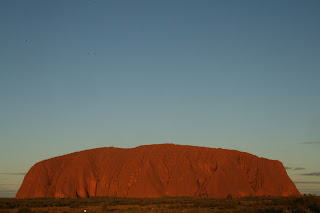 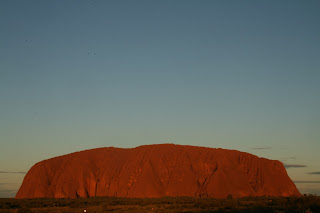 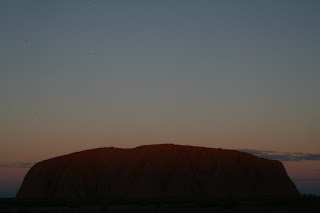 After the sun went down we all got back on the bus and then they drove us to a spot right near the rock that had tables with white table cloths and it looked beautiful. It felt a bit strange being out there at night because it was so dark but when I  saw all the food I was fine. On the menu was kangaroo, steaks, chicken, lamb and pork. It was all BBQ ed and smelt amazing. There was lots of different salads too. We sat next to a lovely lady called Mary who was travelling with her niece. She was from Sydney and was really nice. After the dinner a ranger told us all about the different stars and some interesting stories about how the aborigines used the stars to help them travel through the night. There was so many stars in the sky and I couldn't believe how bright they all were when the ranger asked us to turn off our torches. It was pitch black and the sky looked like it was lit up with a million stars. I have never seen it look like that at Mt. Martha and the Milky Way looked more like a big white rainbow. I really loved being out at the rock at night but it was a bit freaky and I couldn't believe how quiet it was. Mum said the silence was deafening..........whatever that means!
Tomorrow we are off to Kings Canyon for more big walks. I cant wait to hit the bed and rest my head.
Posted by DeanstravelVietnam at 16:42