We only had a very small drive today to Kunnanarra which was 78kms. Kunnanarra is the East gate to the Kimberly. We said goodbye to our friends Tom, Michelle, Sam, Lou and Abby (the Whites), Charlotte climbed her last tree with Abby and we swapped details so we can catch up with them next time we head up to the farm. Dad is going to go take Charlotte and I  to the Yaapeet oval and show us where he lost his cruciate ligament about 22 years ago. Mum and Dad were up at Swan Hill one weekend and dad headed off with some of mums mates who were playing football for Berri/Culgoa at Yaapeet. She made him and them promise that he wouldnt fill in for them but he didnt listen and there just happened to be a spare set of football boots that fitted Dad. He ended up in the Swan Hill Hospital which ruined their whole weekend.  Dad said it took a fair while for mum to get over that but i dont think she has actually got over it. Dad said she might get some closure if we all visit the Yaapeet footy oval together and do a special reconciliation . He had to have an operation and was off work for 4 weeks and it was nearly a year before he could run on it again. The Whites are heading down the centre and we are heading to the West, so mum and dad were really disappointed because they both really enjoyed their company and had a great time talking and laughing with them. Dad said 'they are always welcome at our campfire anytime.'
When we got to the our caravan park at Kunnanarra we all hoped on a golf buggy and a man took us around the park so we could pick out a spot. This was fun and very unusual because normally they just allocate you a site. We picked out a shady site that we thought looked great because the pool and amenities were only a few meters away and the site had afternoon shade. But, we soon found out that this 'great' site was located under a tree that was home to cute, furry bats. Trouble with this was that these bats weed all over our van and awning and apparently it is really bad for the paintwork and can eat away the paint.  We had to borrowed a great big brush from a couple next door to us. They came from Wangaratta and the lady used to work with my aunty Leanne (Dean). 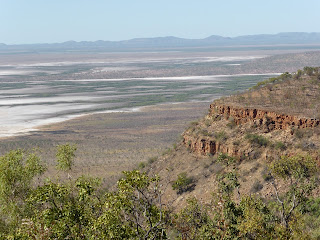 We went to Wyndam for a day which is reconised geographicly as the TOP TOWN of the WEST. It may be geographicly the 'top town' but it certaintly isn't one of my top towns to visit, it was a waste of time. We went to the Five Rivers Lookout which is exactly what it is. Dad found this quite interesting, but for the rest of us girls it was as boring as watching grass grow. There was a massive statue of a crocodile in town, but you couldn't climb on it. Mum took photos of me and Charlotte next to it, but that's the only one I'm getting close to. Wyndam is known for having the highest consumption of beer per person in Austraila which mum said is probably not the best advertisement for a town to have but it sort of sums up the town.
We were planning on staying at El Questro Station, but after talking to other people we decided to just do a day trip from Kunnanarra instead. The road was really rough and the facilites were not as good as the caravan park at Kunnanarra and there was no pool. No pool, No power, bad facilities and HOT WEATHER!!! NOT 4 ME!
We had to drive through a couple of creek crossings to get to El Questro Station, but the water only went up to the top of the wheels or bottom of the car doors.

We went to Zibedee Springs which is a thermal pool and we even found our own massaging waterfall! After having a relaxing time at Zibedee Springswe headed to Emma Gorge to do a 6km trek that was rated DIFFICULT! 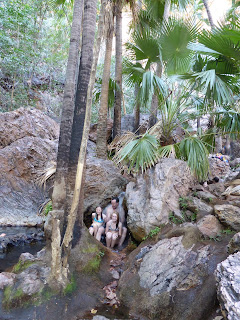 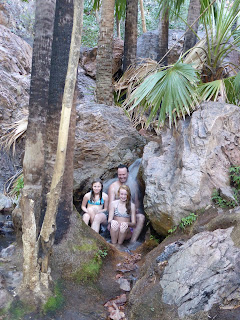 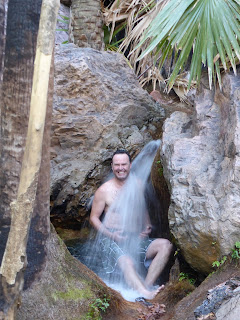 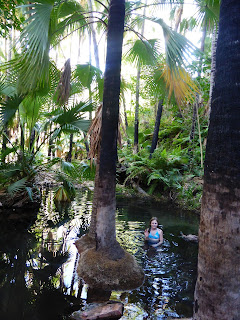 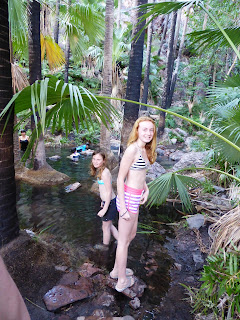 Before we went on the walk we went in the resort pool to cool down and had a delightful lunch at the Emma Gorge Restaurant. Some of the rocky areas along the way were hard to get around because of the size and position of the rocks. We even had to pull each other up to the next rock, but the walk was definitely worth doing to get to Emma Gorge. It is my favourite gorge that we have visited and there was a small part of the falls that was warm like a miniature thermal pool. I was worried about Salties (crocodiles) being in the water hole, but i realised the walk in was hard for me so i don't  think any crocodile could even try to get up the difficult rocks with their little legs. 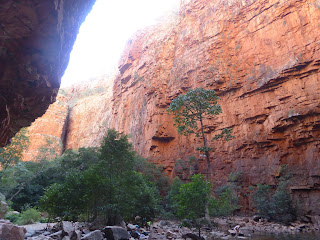 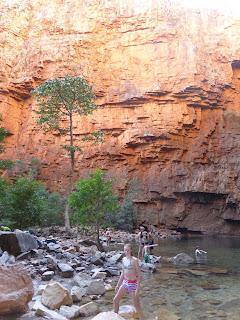 The waterfall was absolutely magnificent and the water was crystal clear. There was only one other family at the gorge when we were swimming there and they were from Cranbourne! 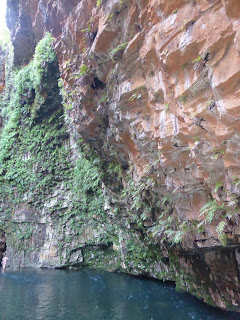 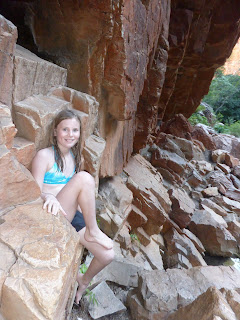