We headed off to Lake Argyle this morning and we had to empty our fridge of all our vegetables and fruit because we were heading across the Western Australian border and need to go through Quarantine at the border.
We didnt have that much because Sarah Hansen had warned us how they took all of their fruit and vegies and even their honey. 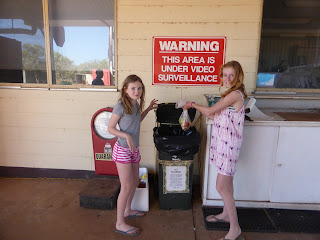 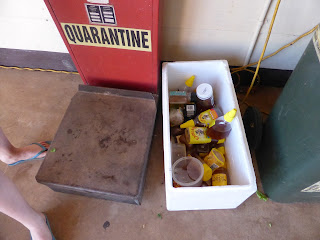 Mum gave some people next to us our vegies and honey and they gave us back some Emu Beers. They were Queenslanders and said this was the best Western Australia beer so dad said he would give it a go. We got to the border and handed over our apple cores and banana skins that we had eaten on the way. The guy was really nice and had a quick look in the fridge but mum must have looked trustworthy because he didnt even look in any cupboards. We have met some people that told us how they have taken more than an hour and gone through every cupboard and looked in every possible spot and then they had to spend the next hour putting everything back again. We saw a box that had lots of jars of honey in it so lots of people must have not  known that you cant take honey across the border, even  ones that werent even opened.
We arrived at Lake Argyle just after lunch and went over to the most amazing pool. It is an infinety pool and sits right on the edge of a cliff and  it looks over Lake Argyle. When the Hansens and the Deans were travelling through here they sent us photos and I remember thinking how beautiful is was and how cold we were back in Melbourne. Here is a photo especially for them. 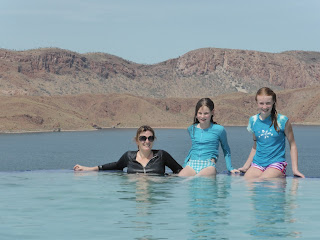 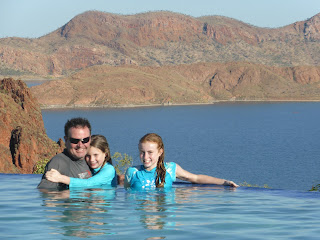 We went to the Christmas in July Roast dinner for a special night out. It was nice but a little bit dry. Dad's roast on his Ziggler (Dad's BBQ) is better.
We all went on the Lake Argyle sunset cruise that took us all around the lake and we had nibbles and drinks included. Charlotte and I hovered around the nibbles table and sat right at the back where the soft drinks awaited us. We got to a spot where the man said 'it's all O.K. to jump in' I wasn't so fond of doing that because the man had just told us that there are 35,000 fresh water crocs in the lake, but Tess Hansen swam in here and survived so I gave it a go.
I CAME OUT ALIVE!!!! 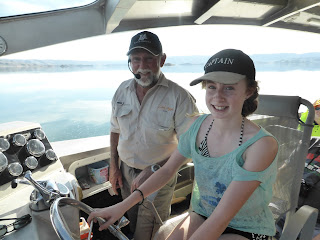 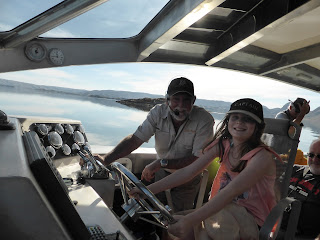 Charlotte and dad jumped off the roof of the cruise boat and made a huge SPLASH! when they hit the water. I got in the lake, smiled for a photo, and got back out again.

Lake Argyle is the biggest man made lake in Australia and it is 2,000 square kilometres and it is classed as an inland sea.
We watched the sunset over the lake and it was absolutely spectacular as it was a really cloudy evening. The tour guide said it was one of the best he had seen because of all the bright colours among the sunset. 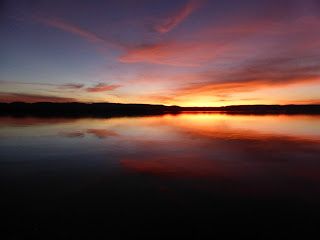 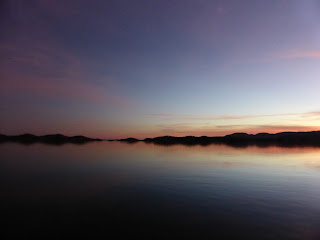 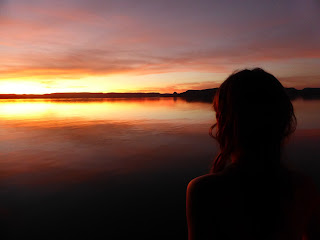 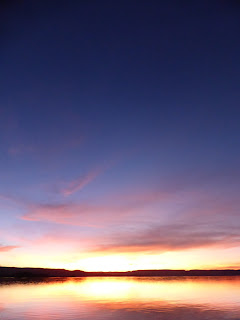 We also went to the Durack Homestead on Argyle Downs Station which was the home of a famous pioneering family in the Kimberly's. It was constructed out of handcrafted limestone blocks  with crushed termites mounds' used as motar and it was apparently a magnificent building for its time. It was built in the 1890's and was moved from it's original site (which is now under Lake Argyle) in the 1970's when Lake Argyle was built and filled.  The Homestead was dismantled stone by stone with every stone coded so that it was able to be rebuilt with every stone back in it's original position and  now it is displayed just out of the Lake Argyle Caravan Park. The rest of the Argyle Downs Station is now submerged under the Lake Argyle and divers have been down to explore the remains. Mum and Dad really enjoyed visiting this place and said they would have loved living out here in this big white house with its big wide verandas and beautiful green lawns. Charlotte and I thought that it would be too hot and too far away from a town and would be happy to visit it for a holiday but not to live for good. 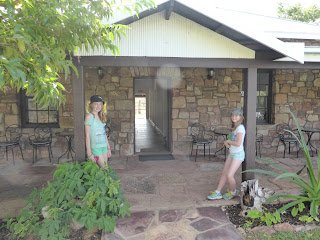 We met a really nice family who were from Yaapeet in the Mallee which is about an hour from where mum grew up. They were friends with mum's cousins and Tom (the dad) is really good friends with mum's old boy friend. They had a great time laughing about their youth and all the different people they both knew. They had a daughter called Abbey and Charlotte and her loved climbing trees together. The next day Abbey accidently locked the keys in their ute and dad and Tom tried to brake in with a wire coat hanger and a plastic spatula! I had never seen this been done before, but listening to dad and Tom talk of the many times that they had broken into cars this way (not srangers cars, just when they or their friends locked keys in the cars) it seemed like they knew what they were doing.
Posted by DeanstravelVietnam at 01:44