We headed off from Kakadu today to Victoria River Roadhouse for an overnight stop and then onto Lake Argyle.   We were feeling very happy with ourselves as we didn't get eaten alive by any midgees at Kakadu. Many people had told us about how bad the midgees were and we were ready for them. When the Bricks were travelling through Western Australia last year Simone got 80 bites in one night and she was itching for ages and said it was unbearable.  Mum has been making us take Vitamin B tablets every morning (and they are huge) because she had been told that the midges and mosquitos don't like the taste of skin with Vitamin B in it. We have also been putting on some ointment that we bought that is called ""the local sandfly and mozzie stuff". We are not sure which is working and are too afraid to stop one incase we get bitten. We have seen lots of people with bites and they look really sore and itch for about a week and they can get infected and leave scars too.
I forgot to  tell you all about the "croc siting" in my last post. When we were in Darwin and were waiting to get driven into the city, mum was reading the local paper and i was looking over her shoulder. I couldn't believe what i saw. There was a headline that said "Wangi Falls closed due to croc siting". I nearly fell off the edge of mums chair. We were only there the day before and were swimming in Wangi Falls. I was really nervous about swimming there and took ages to get in and dad kept telling me there is no crocodiles in the Falls and stop being a WOOS. We met some people the next day and they said that they caught a two metre salt water crocodile and dad promised me that it would have only been a fresh water crocodile and they don't eat humans. I could have been eaten by a croc and I don't think i will trust Dad again.
We stopped at Pine Creek for lunch and mum did her usual tasty salmon wraps and we fuelled up and headed off again. We arrived at Victoria River Roadhouse at 4pm and after setting up the van we went for a cool drink on the deck.
We met another family from Vermont which is were dad used to live when he was at primary school. Dad knew some of their friends from his school days and they were travelling for a term too. 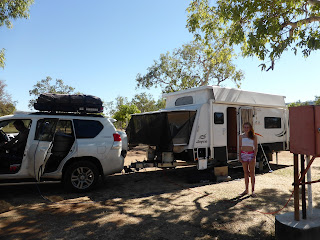 We had another Beef Rendang in the thermo for a quick dinner and then got our phones out and used the star discovery app which shows us where all the different stars are up in the sky.  My favourite group of stars is the southern cross and i love  how bright the sky is up here with all the stars. I will miss seeing these beautiful stars when we get back to Mt. Martha and wish I could describe to you how beautiful it is but I don't know enough words to describe it. It feels like a different sky with thousands of lights with the blackest background.

We also saw some helicopters fly in to the Road house that afternoon which were from the remote cattle stations and the young guys come in on a Friday night for a night out at the bar and then fly home the next morning. That is a long way to come for a night out but i suppose it must get very lonely out on the stations for young people. Dad said it would be interesting doing a breath-test on them.