Today we headed into Darwin and we stayed at the Free Spirit Caravan Park. This park is amazing. It has three pools and was lovely and green with lots of shady palm trees. We stayed here for five nights and mum and dad both said that they wished we could have stayed longer. Our friends from Tassie were here too so we had lots of time swimming in the pool which was lots of fun because it had a waterfall.
We also added a member to our family called Edward. Dad had finally got the son he always wanted. Dad is so happy and he said his life is complete now that he has Edward on board and he will be travelling with us for the rest of the trip.
Edward Engel is apparently not just a car fridge he is a special edition gold anniversary gift for life. Dad loves going out to Edward and checking what temperature his beers are at and I think Dad loves his Engel even more than mum loves her Thermo. Dad got lots of extra things with his Engel because it was it was the 50th Anniversary since they made the Engel. He got an Engel cap, Engel wallet, Engel torch, Engel fishing bag, Engel stubby holder, Engel outdoor light and he said mum was even lucky too because he also got a set of 6 high quality food containers that he is going to give to her. She couldnt keep the smile off her face.
We also had our Prado serviced in Darwin and we were all very impressed with the customer service at the Toyota Dealer. When we pulled up a lady was waiting with cups of  "real coffee" for us and some hot chocolate for Charlotte and I. We had a courtesy car take us into the city and he even gave us a little tour of the places to see. We booked into a special DUCK -A-BOUT tour which was an old army duck that takes you around the streets of Darwin showing lots of historical sights ( we saw three houses that survived cyclone Tracey!!) and then we drove straight into Darwin Harbour and then we became a boat.
It was a bit strange and Charlottes eyes nearly popped out of her head because I think she thought we were just going to sink but we floated ( which I was happy about too). Charlotte and I got to drive the army duck in the harbour and it was so pretty looking back at the beach. 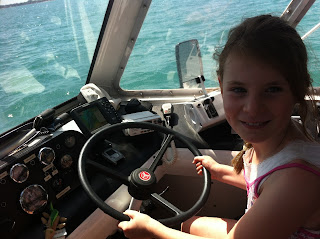 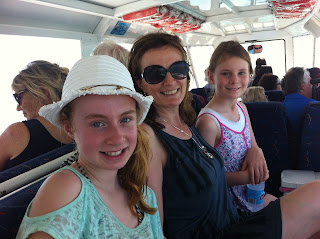 The colour of the water was amazing, it was so blue and I just wanted to dive straight in but you cant swim in the ocean at Darwin because there is too many dangerous things in it that can kill you.
There are saltwater crocodiles, sea snakes, sharks, stonefish, stingrays and stingers. When we were cruising around the Harbour we saw three people that were wadding in the sea up to their knees and our tour guide called them "croc bait", she said they were definitely  tourists because the locals NEVER go in the water, even up tp their knees. There are twenty croc-traps in the bay and they catch one everyday of the year and last year they caught 380. I didn't want to swim in the bay after she told us all this information and was happy to be in boat.

We visited the Darwin Museum and went to the Cyclone Tracy exhibit. Cyclone Tracy hit on Christmas morning in 1974 and 71 people were killed and the highest winds that were recorded were 240 kms an hour. Cyclone TracyIt destroyed more than 70% of Darwins buildings and 80% of Darwins houses. It was the most compact Cyclone on record in the Australian basin with gale force winds only extending 48 kms from the centre and was a category 4 cyclone.

It was sad seeing how much devastation it caused and I cant believe it happened on Christmas morning. Mum and Dad both remembered hearing about the cyclone when they were little kids and mum was only 6 and dad was 10.  It is hard to believe that they could rebuild the city to what it looks like today. After cyclone Tracey all buildings and houses are built under special rules so that they can survive cyclones. All the roofs have to be screwed on with special screws ( they are not  allowed to use nails)  and they are only allowed to use certain materials. Dad explained to me other things that they have to do too that we don't have to do when we build a house in Victoria. There was a small room that you could go into that was the recording of the sound of the wind and all the houses getting blown apart that was taped by a man during Cyclone Tracy. It was so loud you could even hear it from outside but I didn't want to go inside because a man told us it could be very scary for children because it was deafening.  Dad went in and Charlotte  stepped inside then stepped out after 5 seconds because it freaked her out and she said she really didn't think it was good for little kids to listen to either. We met a lady who was only 6 months old when the cyclone hit and their house was flattened and her family left Darwin and had never been back. She came back to show her daughters where her old house was ( not that its there now) and said that is was very strange to be back after hearing lots of sad stories during her childhood about that Christmas Day. I am so glad that we don't get any Cyclones in Mt. Martha.
We also visited the War Museum and learnt about the Darwin bombings during World War 2. Dad  and mum really enjoyed this and there was lots of interesting  things to see and listen to.
I am going to do a special project in my journal about this because I thought it was interesting to learn how they used to fight wars and I am glad that I we don't have wars like this anymore. There was lots of sad stories about how many people died and mum ánd dad were really surprised that the Japanese dropped more bombs dropped on Darwin than they dropped on Pearl Harbour in Hawaii.
When people saw the planes first flying over Darwin they all thought it was just more Americans arriving to help the Australians but it was the Japanese who had come to bomb Darwin. Darwin was a big Army and Navy base and there were lots of ships in the harbour which were used for sending the  soldiers to the battlefront and by bombing Darwin the Japanese could stop the Australians from sending anymore soldiers.
Later that day we went to the Mindil Beach Markets and caught up with our Tassie friends again. There was lots of food, craft things, jewellery, clothes and lots more. Mum bought some tie-dyed dresses and I bought some earrings and I also got a tattoo. It is a henna one like the one Andy got in Thialand and it lasts about 3 weeks. Charlotte bought a special little thing that you put in your mouth and it makes you sound like a bird. It was really cool and she whistled away all night while we walked around. Dad was very bored and only cheered up when we got to the surf club area and got some beers.
We then went down on to beach ( with hundreds of other tourists) and watched the sunset. It was so spectacular and so red but I was a bit nervous going to close to the water when I was taking the photos because I kept thinking about saltwater crocodiles that the lady told us about. I didn't want to become croc-bait. I think we will leave Dad behind when we go to the next market because we could have seen more and spent more time there and he looked so bored with it all.
The next day we went to the wave pool which is in the middle of the city. I really enjoyed all the waves and we spent hours just catching waves and there was about 8 different types of waves that it can make. We had boogie boards and rings that we could use and I wish we had one of these in Mt. Martha because it was so much fun. We loved Darwin and I would love to come back here again one day.