We headed off for Litchfield National Park today which was only about a 3 hour drive. When we got there Rowena and George had saved us a great spot under a shady tree. This was a much smaller park but mum and dad loved this one. It had a huge windmill and some horses in the next paddock that we fed carrots to.
Litchfield National Park is a 1500 square kilometre  Park that has many stunning waterfalls and lots of magnetic termite mounds.
It is very important to the Koongurrakun, Mak Mak Maranunggu, Werat and Warray Aboriginal people who believe their ancestral spirits formed the landscape, plants and animals in the park. We went for a walk to Wangi Falls which was beautiful. The water was freezing and I was a bit nervous about getting in because the signs said that the Park Rangers try to make sure there was no salt water crocodiles in the falls but people swam at their own risk. 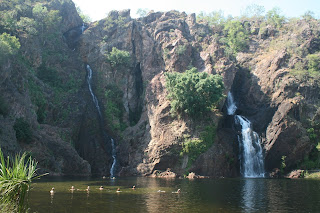 There was freshwater crocodiles in there but everyone says that they don't eat humans but I didn't trust them. We also went to another Falls called Florence Falls and we all thought that was better than Wangi. It was prettier and it wasn't as packed and I swam right out to the waterfall with Dad. The noise of the waterfall was very loud, the water felt like little rocks hitting us on the head. Swimming in the  falls were very refreshing and I still find it weird that we are out in the middle of such a big dry country and then we come across these beautiful cool waterfalls.


I met a girl called Mary and her family who were staying at our caravan park who lived on the Gove Peninsula in a town called Nhulunbury. This is a mining town that is right on the north-west tip of Arnhem land.
Her mum Sue is a remote Nurse and her dad Allan works for Rio Tinto in the mines and they originally came from Sydney. She also has a little brother Darcy. Mary is in grade six too and she has no shops in her town and it takes two days to travel to the next town. Mary has a best friend who is Aboriginal and her father owns Arnhem land. The aboriginal family have "adopted" Mary and gave her a skin name which means she is welcome anytime at their homes. It is a big honour for a white person to be invited into a clan and  I really enjoyed listening to her stories. Marys hair is so long, it is even longer than Pippa's and I put a braid in it for her.
We all sat around Georges fire pot that night and mum and dad had a great time listening to Sue and Alan tell us stories about living in such a remote place. In the wet season they get so much rain that they cant even get out of their town as the roads are all underwater. I swapped email details with Mary and I am going to keep in contact with her, she was really nice and we used some special purple chalk to dye some of our hair that night. It looked like Mrs Tuemans but it was purple not pink. Mum said it should stay in for a few weeks so I am going to try to keep out of the pool to make it last as long as possible. We also met some another lovely family from Broome  (Nat and Robbie) and we are going to catch up with them when we are at the Cable Beach Caravan   Park. She was also a nurse too so mum and Sue had a good time laughing and swapping stories around the fire. Robbie is a policeman like Rowena so everyone had lots to talk about. We had a very late night so all slept like logs.
On our last morning there we got up to pack and mum noticed her laundry bag was missing. We looked everywhere but couldn't find it. When we spoke to Rowena that afternoon she told us about a lady who she caught taking the pegs off her line and that another lady had also had her bucket taken. Mum said that she was obviously updating her laundry kit and that we should probably be a bit more careful about what we leave out.  When she took the laundry basket she even took some dirty  clothes that were in it, I hope none of mine where in there but we cant remember what was actually in it.We are off to Darwin tomorrow and it is only a short drive so it will be an easy day.
Posted by DeanstravelVietnam at 18:59