Kakadu is 170km from Darwin and is another World Heritage List Site in Australia. Aboriginals believe spirits shaped  Kakadu during the dawn of creation known as Dreamtime. These spirit Ancestors travelled across the country creating landforms, plants, animals and the Binij/Mangguy people. The tracks left by these Ancestors are known as dreaming tracks.
These ancestors created laws to live by, they defined kinship, created language and taught the people how to look after their country and become the custodians of the land. Mum and Dad wanted us to learn and  understand more about how the Aboriginals lived and are connected to this  land so they took us on a Special Safari tour so we could experience it for ourselves.
We went on a day and evening tour with a guide and a  local Aboriginal lady called Patsy. We had to drive to  Yellow Water and then we were taken out into the National Park on a Safari Truck where Patsy taught us how to find food in the bush. We learned how to find bush carrots by finding a vine with special flowers on it and following it down to the ground, where she would dig the carrot up with her digging stick.
This was very hard to do as the vine was very thin and fragile and would break if you pulled it to hard and then you lost it.  Patsy also showed us how to find water chestnuts which were also called brown onions but were only the size of my thumbnail.
We found these by breaking up the dried mud in some waterholes with hammers which was really hard work as the mud had set like a rock. This made me very thirsty but we were lucky as mum had some water and museli bars for us.  Aboriginal women and children would spend hours walking around in the bush everyday searching for food to feed their families while the men were out hunting for kangaroos, turtle, snakes and other types of meat.

Patsy also showed us how to find green ants. They make their nests in leaves and live high up in the trees, you then pull the branch down and get the nest in your hands and bang your hands together to smash the ants up. We tasted them and they taste like lemons, when we were eating them some of their legs were still moving. Charlotte tried a special wood grub but I didn't try it as it looked disgusting and she said it wasn't that nice.
I really liked the plum fruit, it looked like an olive and it was about the same size, Patsy said that one of these little fruit had the same amount of vitamin C as six large oranges, mum said to eat lots of these so we did. I was really surprised how much food you can get from the bush, but it takes a long time to find it, especially if  it was for a family and you wouldn't know it was there if Patsy hadn't  shown us. We drove out between two wetlands and we set up for dinner, Dad had to make fire by spinning two sticks together very quickly in his hands, when it started to smoke  we added a birds nest and blew on it and it turned to flames.
﻿ Charlotte and I plucked some Magpie Geese (that had been shot that morning) that were hung by their feet in a tree, they were then put in a large piece of paperbark that Dad helped Patsy pull off a tree .
The Aboriginals use paperbark for lots of different things like, blankets, floor coverings, shade, shelter and wrapping their babies in. Patsy also showed us how to make paperbark bowls which you could transport water in.
When the fire had enough coals we put the bush Vegetables, Magpie Geese, some Buffalo Meat and Wild Ducks and wrapped them in the paperbark, then placed some coals over the top.
While the food was cooking we learnt how to make string out of the leaves from the palm branches, they would then use this string to make dilly bags to carry things in, they could colour the string by dyeing it using crushed up berries and flowers.
We also learnt about Calendar plants which told the Aboriginal people of the changing of the season and when different foods were available. When a particular yellow flower would come out in bloom, this meant that the Crocodiles and the Turtles had laid their eggs and it was time to hunt for them so that they could be eaten.  They apparently taste very nice and the Aboriginal people really love them but I have tried crocodile meat and I didn't like it so i am thinking that i wouldn't like the crocodile eggs either and I also wouldn't want to get caught by a crocodile stealing her eggs.

When our dinner was ready we sat down and watched the sunset over the wetlands, it was absolutely amazing and their was thousands of birds taking off and landing on the water and it looked spectacular. We then headed back to the town where Patsy gave us some torches so we could shine them out through the Safari truck so we could see the night life. 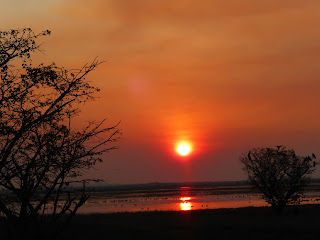 We then had to drive back to Jabiru in the dark where we nearly hit a wild pig and drove through lots of fires and smoke.
﻿

I really enjoyed learning from Patsy all of the techniques that the Aboriginals used thousands of years ago to survive in the bush and have a much better understanding of their culture and how they survived in the outback.

Our last day in Kakadu we went on a trek visiting ancient aboriginal rock art sites. We had a fantastic tour guide who explained what all of the different rock art meant and all of the aboriginal stories behind them. 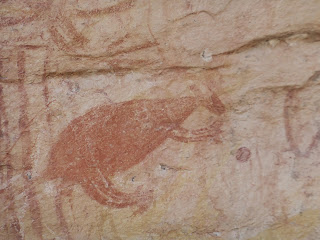 These sites are very sacred to the aboriginals because this is where they held special ceremonies and initiations. Did you know Kakadu's rock art represents one of the longest historical records of any group of people in the world? At the end of our art walk we climbed a 250 meter rock ledge and sat down to watch a superb sunset over the Nadab Flood Plains. 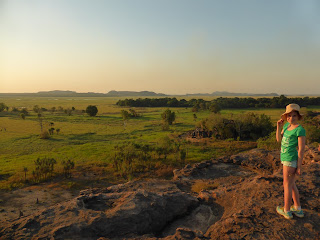 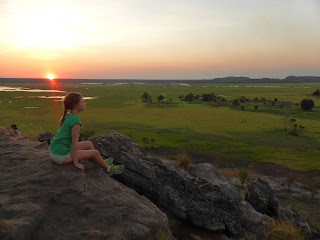 It felt like we were on top of the world and the colours were like a kaleidoscope and it was absolutely breathtaking, but the most amazing thing was that there was about 80 people there and  no one was talking... it was complete SILENCE. When Tess Hansen visited Ubirr and watched the sunset she said to David 'this must be the most beautiful spot in the world.' And I agree with her.
﻿﻿
Posted by DeanstravelVietnam at 02:54